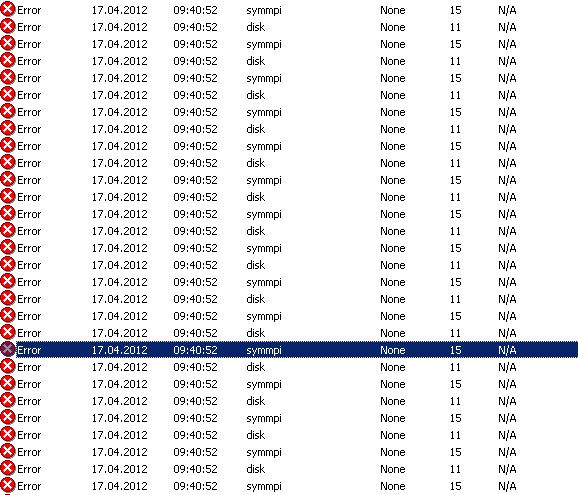 So this had me cursing for quite a while.

Case was a VMware virtualised 2003 R2 32-bit server, running IIS (customers intranet) which was pretty essential for the customer. At an increasing frequency, these two error messsages were pounding the log:

Event ID 11 The driver detected a controller error on \Device\Harddisk0.
Event ID 15 The device, \Device\Scsi\symmpi1, is not ready for access yet.

In effect the server was useless at times, completely unresponsive, and the eventlog looked like a warzone. VMware KB’s indicated that this was a storage problem.

We’d been having some issues with the SAN (HP P4500 iSCSI), but none of the other servers or any monitors indicated that there was an underlying problem this time, so I let that off the hook.

But apparently something was eating up the disk-performance; CPU and RAM were both fine.

Process Explorer indicated that there was a csrss.exe process running at 50 mb/s for some reason. Which is unusual to say the least.

Taskmanager indicated that this had been going on for a while, as the IO counter for that process was off the charts.

Though I’m not sure what triggered it; this is the hotfix to remedy it all; which would indicate something to do with RDP-sessions. I’m not entirely convinced that’s the trigger point, as this was a web server, but there was a service user logged on at all times, which could explain it.

One hotfix and a reboot later: all is well.